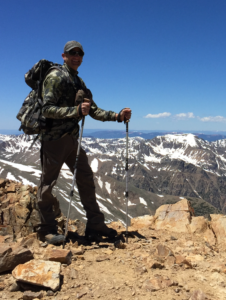 People who love the Home are always looking for new and interesting ways to help us raise the funds we need to serve children and families.  Currently we are serving over 130 children and 39 single moms in our Residential and Single Parent Homes.  You can imagine the cost involved in serving so many.

Bobby Moberly lives near Mayhill, NM with his wife Tammy.  He attends church at the Mayhill Church of Christ, where he was first exposed to NMCCH.  Bobby got into running a little over two years ago just to get into better shape.  After getting to where he could run longer distances he started doing ultra-marathons and long adventure runs.  While running was good for his health no one else was benefiting from it.  So after praying about it and talking with a friend he decided to try a fundraiser where people can pledge money for each mile he runs during races and adventure runs. The first fundraiser race was a 50k race in Las Cruses, NM on March 2nd.  He used a website called PledgeIt.org to manage his campaign called “Miles for God’s Kids”.  Bobby raised over $800 for the Home on his first run!  He has more runs and races in his sights for the future to raise funds for the Home.

Pledge It is a website for athletes who want to use their talent to give back in some way.  The athlete chooses a charity to support and then uses social media to share with friends and family.  Supporters then donate toward that cause for every mile they run, basket they make, touchdown they score, etc.  The New Mexico Christian Children’s Home is listed as a charity on the Pledge It website.