Jesse is 17 years old and came to the Home when he was 9.  He has been with us all but 3 of the last 8 years.  To say that Jesse came to us from a difficult family situation would be an understatement.  With the exception of a couple of turbulent years when Jesse was not at our Home, he has been a regular camper at Ponderosa Christian Camp, Ponderosa, New Mexico.  Our generous donors make it possible for young men like Jesse to attend Bible Camps during the summer.  Anyone who has been to Bible Camp knows what a life changing experience it can be for our young people.  The impact that godly Christian leaders and childhood friends from camp have had on Jesse underscores the importance of experiences like this. 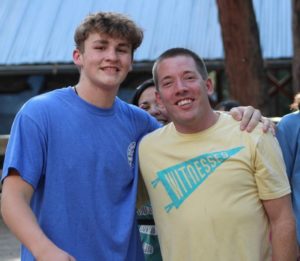 Jesse and Barry Hobson. Barry is the Youth Minister for the Canadian, Texas Church of Christ. Jesse lists him as one of the people who has mentored him over the years. Barry encouraged Jesse to lead the last devotional of the week that Jesse was a counselor.

This year, Jesse attended the High School session at Ponderosa.  A couple of years ago he served on the kitchen staff at the Camp and got to know many of the leaders.  His enthusiasm and leadership skills were evident to the staff there so they asked if he could return later in the summer and serve as a cabin counselor.  Jesse returned for the Middle School Session and served as a counselor for 11 and 12 year old boys.

Jesse shared about his experience as a counselor.  He stated “Because of what I went through, I can help others and I’m thankful for that.”  During camp, one young camper learned that his parents were getting a divorce.  Jesse explained to the young man that it was good that he learned of this news at camp while he was surrounded by people who love and care for him.  Jesse talked with him, shared his own experiences of a broken home, shared scriptures that would encourage him when he went back home and prayed with him.  Jesse shared that he spent the rest of the week focusing on this young man to encourage him and make sure he had fun while he was at camp. 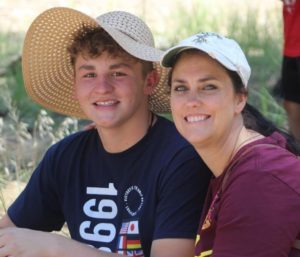 Jesse and Misty Andrews. Misty is a co-leader for the youth group at the Santa Fe, New Mexico Church of Christ. She has been a big influence on Jesse’s life for many years.  Missy was adopted through NMCCH in the 1970’s.

“2 Consider it pure joy, my brothers and sisters, whenever you face trials of many kinds, 3 because you know that the testing of your faith produces perseverance. 4 Let perseverance finish its work so that you ma   y be mature and complete, not lacking anything. 5 If any of you lacks wisdom, you should ask God, who gives generously to all without finding fault, and it will be given to you.”

Jesse is entering his Junior year of high school at Portales High.  He plans to stay here and live in our after care housing when he turns 18 and finish high school here.  Then, Jesse would like to attend welding school.

It is a great privilege to work with fine young people like Jesse and watch God change their lives!  This is why you give to our Home and why we do what we do! 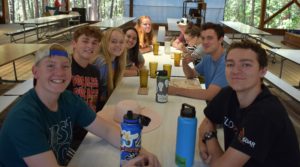 Jesse with his co-workers at Ponderosa Christian Camp.